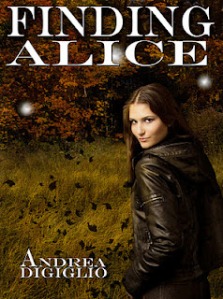 Blurb from Goodreads:
Cursed with an intense version of empathy Alice runs from a wasted life to start a new one somewhere no one will know her; Hell, Michigan. Alice works at a hole-in-the-wall bar in the middle of nowhere mostly keeping to herself to avoid the overwhelming emotions of those around her. Alice allows her best friend to convince her into taking a few college classes without realizing it would drastically change her life forever. From her first day of class she was hooked on him; his scent, his eyes, the way he talked to her inside her head.

Like in previous reviews, I have mentioned that I love the mythology surrounding fallen angels. I wasn’t about to pass this book up. Overall, I’m glad that I did read because it was an interesting book.

One of the most appealing factors of the novel is the fallen angel complex. They fell from God’s grace because they pursue the daughter of men (For some reason, all the angels that fell were men or so it seems). God is really angry about the fall and decided to cull the fallen angels and there loved ones. I find interesting that this is the aspect that DiGiglio chooses to focus on because it’s not the usual story of the fallen angels trying to re-gain acceptance into heaven. The Fallen know their children will be cursed and continue to have children because they are afraid of Judgement Day. As long as nephilim (children of the Fallen) exist, so will the Fallen.  The Fallen want a fighting chance against the angels of God and are willing to use their children to continue the battle. It sounds selfish but at the same time, it’s very human because we all want to live in the end. This alone is reason enough to read it.

I generally did like most of the characters; Alice was truly fleshed out. She was a very strong character who fought for what she wanted. She wasn’t easily overwhelmed by what she was, a nephilim, or what the future awaits for her. That’s really great that she could take a few blows and still stand strong. Cole wasn’t my favorite character but he was compelling. He had this key scene where he exposes himself to Alice and it feels very vulnerable, almost like ashamed of what he is so he was interesting character. Opps, that’s a little spoiler. We have Camille (Alice’s best friend) and her boyfriend, Jake (who ended up surprising me).  I was surprised to see Alice mad at him for something he didn’t do.  We also have a few more interesting characters that show up and make it seem like a family reunion.

I found it quirky that the fallen angels could communicate through dreams and mentally. There is a lot of mental communication and dream revelations. There wasn’t an explanation for this but I’m going to guess it has to do with DNA. Alice in an empath, she can feel other people’s emotions and somehow can slow down time. The empath powers manifested and seem important in the beginning but later took a backseat in the story. They were mentioned from time to time but she wasn’t really using them. I’m curious as to where it places Alice and what role will her empath abilities have later on.

One of the reasons this novel is getting 4 butterflies is the lack of details in the first person narrative. There were times I really couldn’t see what was happening in the story so that was bit frustrating. At the same time, I know DiGiglio can write great descriptive scenes such as when she is describing the artwork that Alice produces.  I can see the art in the gallery (the battered shower image) but I can’t see the bar where she works at. Currently, the bar looks like the bar from Lost Girl (super cool show). I’m looking forward to reading the second book when it comes out.

14th in the 150+ Reading Challenge
Also qualifies for: Self-published, E-book, 1st in a Series, Cupcake War, Where are you reading? Hell, Michigan

*Disclosure of Material Connection: I am a member of The Virtual Book Tour Cafe’ and a copy of this book was provided to me by the author. Although payment may have been received by The Virtual Book Tour Cafe’, no payment was received by me in exchange for this review nor was there an obligation to write a positive one. All opinions expressed here are entirely of my own and may not necessarily agree with those of the author, the book’s publisher and publicist or the readers of this review. This disclosure is in accordance with the Federal Trade Commission’s 16 CFR, Part 255, Guides Concerning the Use of Endorsements and Testimonials in Advertising.*