Blurb from Amazon:
Claire has her share of challenges. Like being a genius in a school that favors beauty over brains; homicidal girls in her dorm, and finding out that her college town is overrun with the living dead. On the up side, she has a new boyfriend with a vampire-hunting dad. But when a local fraternity throws the Dead Girls’ Dance, hell is really going to break loose.

This novel continues right off where Glass Houses finishes. It gives it a weird vibe, at least to me, it just seems like the second novel is a continuation of the first novel instead of a standalone novel. It has a new plot but it still feels heavily tied to Glass Houses. It’s not a book a person can read without reading the first one because the biker gang is there, Michael’s condition is accepted and not explained, and so is the vampire-dominated town.

Morganville is a messed-up place to live in if you are human because the law is pretty much nonexistent even if police officers exist. The police can’t act against the vampires because the vampires control the paycheck. The humans don’t trust the police either. Spoiler alert: Claire is drugged and a victim of an attempted rape and she does nothing about it. Instead of reporting it, she has Sam (a vampire) threaten the man who attacked her. The law is just a dog without a bite, no way to enforce unless a vampire requests it. No one really gets punished for their crimes against humans. Only crimes against vampires will be judged.

It wan an enjoyable read but there is still something off with this novel. I think it is how much trouble Claire gets in within 48 hours and somehow manages to leave without a serious injury. She just keeps getting deeper and deeper into vampire politics; it is hurting her emotionally and physically but more importantly, I don’t think she is going to be able to leave Morganville when she is done with her two years in school. She may be too heavily invested in vampire politics.

I still like the vampires though. Amelia still has this cold and porcelain appearance that makes her interesting. Sam is the youngest vampire in the town who is attached to Amelia and they have a unique relationship. It sort of twisted but fascinating in that Sam cares deeply for Amelia but she keeps her distance as an experiment. That is wicked of her (awesome and sad at the same time).

3.5-Pretty to look at, maybe capture

25th in the 150+ Reading Challenge
Also qualifies for: Second in a Series, Morganville Series 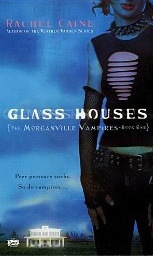 Blurb from Amazon
College freshman Claire Danvers has had enough of her nightmarish dorm situation, where the popular girls never let her forget just where she ranks in the school’s social scene: somewhere less than zero.

When Claire heads off-campus, the imposing old house where she finds a room may not be much better. Her new roommates don’t show many signs of life. But they’ll have Claire’s back when the town’s deepest secrets come crawling out, hungry for fresh blood.

Glass Houses wasn’t exactly what I was expecting. I’m not sure what to think about it but let’s start with what I did like.  The characters are strong and a little extreme. Vampire politics are interesting as well.

Character-wise, I did generally like the characters. Claire is 16, almost 17, years old and going to college so she graduated early.  She is being bully by Monica who is really extreme with her bullying. Monica should be in jail for attempted murder, kidnapping, arson, murder and I can’t wait to see what other crimes she has on her sleeve. Claire, in order to stop the bulling, moves out of the college dorms and into the Glass House where she meets Eve, Shane, and Michael. All three grew up in town and know all about the vampires.  Eve who is gothic and bubbly. Shane who left town and came back, (he is a slacker). Michael who owns the house and has a secret that I find very interesting. In terms of vampires, we have Oliver and Amelie who both have great power in the town. Amelie is the founder and I like her in general. She is very cold but intriguing.

One of the things I did like was the whole concept of a vampire dominated town where the outside forces don’t acknowledge it but the residents do. It’s like a private island dedicated to vampires. At the same time, I just can’t believe that Eve would reveal all that information to Claire right off the bat. It’s not a secret if people are just babbling to everyone they meet. Not only did Eve place Claire in great peril for telling her so but she place herself in danger for revealing the secret.

Since Claire is really smart, her brain places her in danger in this new town. It’s not really her brain though, it’s much more of her making Monica look like an idiot and Monica having a vendetta against her. None of the events would have happened if Claire wasn’t trying to save herself from Monica. Vampire politics did not move the story forward in the beginning.

I do like Claire but at the same time, I find her to be an idiot. She stayed in town after being pushed down the stairs and possibly having a minor concussion. She got kidnapped and she still stayed in town. It doesn’t take a genius to figure out that someone truly wants her death and the best decision is to leave town. I know I would and I don’t need an acceptance from MIT to tell me that. If someone was trying to kill me, school would be the last thing on my brain and I happen to love school. That being said, I do like the fact that Claire is science major but I wish Caine wouldn’t give Claire flack for that. There is nothing wrong with liking the sciences and (I personally feel that) it showcases a strong female character who is brain smart instead of being focused on looks.

I wasn’t completely wowed away by the plot. I found to be quite to be quite boring in certain parts. What I did like was the slow development of the romance between Shane and Claire. It wasn’t instant love, more like she had a crush on him. He developed a crush on her slowly as well. It was sweet and romantic.

I’m giving it 3.5 butterflies because Claire’s idiocy at staying knocks it down half a butterfly; add a not-so stellar plotline it suffers a lost of a half butterfly. And the last half butterfly for the vampires not being as present as the should have been in a vampire-dominated town. The vampires are present but I wanted more vampire politics. The little taste that was given wasn’t enough. At the same time, it was a good book so the rating will be a mix of both. I’ll give it 3.5 or 4 butterflies. I can’t decide.

3.5-Pretty to look at, maybe capture

11th book in the 150+ Reading Challenge
Also qualifies for: 1st in a Series, Morganville Series, Where are you reading?- Texas