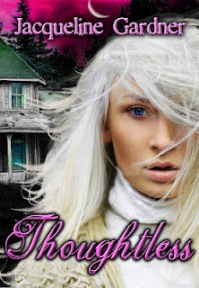 Title: Thoughtless
Author: Jacqueline Gardner
Series: Thoughtless # 1
Genre: YA Paranormal
Source: Author
Pub. Year: 2012
Purchase: Amz/ Smashwords
I received a copy of this novel free of charge from the author in exchange for an honest review.

Blurb from Amazon:
When Bridget finds a dead cheerleader in the janitor’s closet, she becomes the killer’s next target. High school just got worse. It’s bad enough that she can hear the shocking truths that pass through her classmate’s heads. Now she has to worry about staying alive, and all clues point to the one person whose thoughts she can’t read – her boyfriend Terrence. Someone is taunting her, threatening to expose her secret. And when Bridget tries to single out her blackmailer, she’s nearly beaten to death by a mind controlled minion with fiery eyes.

But when Bridget finally comes face-to-face with the killer, suddenly a horde of brainwashed students programmed to destroy her life doesn’t seem so bad.

I enjoyed reading this novel. It was entertaining. It’s been awhile since I have read a novel about a mind-reader.

Let’s talk about Bridget. Yes, she can read minds and yes, she is interested in Terrence because she cannot read his mind. In the span of few days, she is head over hells over for him which is what a school romance usually is. Even though, Terrence is suspected of committing the murder, Bridget sticks to him but the good thing is that she at least questions it at times. Her questioning is not always successful since she does convince herself that he didn’t do it which is actually normal. No one would like to admit, even to themselves, that a person they care about could commit a murder. The importance thing is she does question his involvement.

Rory and Emma are Bridget’s friends. Rory becomes entangled with Bridget in finding who the murdered the cheerleader because the killer is after him as well. Rory does warm up to Bridget in the end. He grows to care about her and warns her about Terrence. He is a really smart guy that does come up with a good plan to catch the killer. Emma is Bridget’s cheerleader friend who doesn’t know about the mind-reading ability. She was just there to prove Bridget has social interactions but they do genuinely care for each other.

What I find interesting is the Coven. I’m not sure if they are witches or just people with special abilities but they are the antagonist of the series. They are highly organized and members have to kill in order to advance their status in the Coven. It doesn’t seem like they have a grey side that would make Bridget want to join them. But who knows? They seem bent on world domination so I really want to find out how and why the group got started.

My one issue is the hoard of the brainwashed students. They are not really there. I counted two important instances where victims of brainwashing come after Bridget (and one of them is not a student). I was picturing a zombie-like attack in my head. Instead the attacks are very specific.

In the end, I did like this book and I can’t wait to read the second book. I want an in-depth look into the Coven because they are scary. I think Bridget was realistic in her infatuation with Terrence and wanting to believe in his innoncence.

28h in the 150+ Reading Challenge
Also qualifies for: E-book, Self-published, First in a Series,

Interview with Jacqueline Gardner of Thoughtless

I’m really glad to have Jacqueline Gardner here. She is the author of Thoughtless, a young adult paranormal novel.

Jacqueline Gardner works as a Story Editor for the production company, Labragirl Pictures.  Her love of storytelling began at an early age when she would make up stories with her grandmother before bedtime.  In early 2010, she completed her first novel and has been stuck on writing ever since.  She resides in Colorado and loves hiking, writing, fantasy fiction, and all things cupcake.

In a sentence, please tell us why readers should pick up your novel.

It’s a fun and entertaining read that lets you see what it’s like to be a high school mind-reader!

Why did you decide to have a main character that could read minds?

It was a thought I had one day, and I went with it! I write what I love and I had a lot of fun with the main character

What was one of the most difficult scenes to write in Thoughtless?

Probably the ending I wanted to leave things open for book two, but at the same time I wanted readers to feel like most of their questions had been answered.

Bridget and Terrence’s first “date” was more of a blind date, would you ever consider going on a blind date?

I’ve never been on a blind date. I was always the one who set up my friends. But first dates are awkward, blind date or not!

Bridget is going to attend Hartfield Manor in England, would you mind giving us a sneak peek into her new life?

Yeah! Bridget is about to become the “new kid” in a school with students just like her. We’ll meet new characters, see Bridget’s powers develop and learn more about the coven. Yes, they’re planning a comeback!

What advice would you give to an inspiring writer that is interested in being self-publish?

Find a solid critique group and don’t be afraid to put yourself out there.

What has been the most rewarding experience regarding Thoughtless?

I learn a lot about myself with every story  write. I drew on my own high school experiences when I wrote Thoughtless. Looking back, there are a few things I would have done differently. But Bridget is all about moving forward. She’s realized that dwelling in the pasts gets you nowhere. I believe that too 🙂

What is the oddest tasting cupcake you have ever had?

I haven’t come across one yet! I know some people aren’t fans of savory cupcakes but I like both sweet and savory. A cupcake is a cupcake.

If you be a goddess, which one would you be?

I love the ocean. I’ve always felt comfortable underwater. Is there a female sea goddess who could take Poseidon? I would be her.

The counterpart to Poseidon would be his wife, Amphitrite, goddess of the sea. Excellent choice.

Thank you so much for the interview.

Blurb from Amazon:
When Bridget finds a dead cheerleader in the janitor’s closet, she becomes the killer’s next target. High school just got worse. It’s bad enough that she can hear the shocking truths that pass through her classmate’s heads. Now she has to worry about staying alive, and all clues point to the one person whose thoughts she can’t read – her boyfriend Terrence. Someone is taunting her, threatening to expose her secret. And when Bridget tries to single out her blackmailer, she’s nearly beaten to death by a mind controlled minion with fiery eyes.

But when Bridget finally comes face-to-face with the killer, suddenly a horde of brainwashed students programmed to destroy her life doesn’t seem so bad.

Thoughtless can be purchased at Amazon and Smashwords

Posted in Interviews and Guest Posts