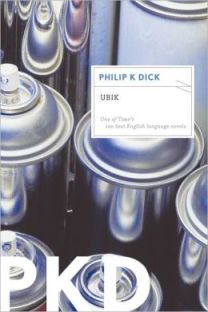 Blurb from Amazon:
Glen Runciter runs a lucrative business—deploying his teams of anti-psychics to corporate clients who want privacy and security from psychic spies. But when he and his top team are ambushed by a rival, he is gravely injured and placed in “half-life,” a dreamlike state of suspended animation. Soon, though, the surviving members of the team begin experiencing some strange phenomena, such as Runciter’s face appearing on coins and the world seeming to move backward in time. As consumables deteriorate and technology gets ever more primitive, the group needs to find out what is causing the shifts and what a mysterious product called Ubik has to do with it all.

Philip K. Dick is a trippy author that I immensely adore but his books tend to make doubt what I actually read. Ubik is no different. As readers, we think we understand what is going on until the final chapter just spins it on its head.

Glen Runciter is an important character but I feel the lead character is Joe Chip who does not know how to live in a capitalist world. He is always out of cash, he doesn’t know how to use consumer products properly; he doesn’t have his life in order. The world of Ubik  is a world where capitalism has been taken to an extreme. In order to use a home coffee machine, the characters have to pay it 5 cents. To open the door to an apartment requires money. To leave said apartment, it requires money to open the door. It’s a harsh world and Joe Chip has no concept of money so he is constantly struggling to survive in this world.

Joe Chip and the surviving crew members of the expedition return to Earth and find that their money is “funny.” Sometimes it is worthless but other times, the “funny” money can buy items. The technology is going backwards and becoming less sophisticated and the crew makes a half-hearted attempt to understand why but they just go on with their life. Joe, Al, and Denny are the only ones who make an attempt to understand what is going on.

People who have recently died or in the final moments of death can be placed in “half-life” which means they are reanimated if they are death or in suspended animation if they are almost death. As long as their some brain activity, half-life is possible. Think of a zombie virus that doesn’t turn people into flesh-eating zombies but just keeps them sane  a little longer. That’s half-life but the key is it’s half-life so the world inside half-life tends to collapse on its self and return to a simpler technological society because the mind begins to deteriorate so the people are losing their memories. They tend to remember their earlier memories more than their recent memories. With that in mind and the fact that Joe Chip’s world is regressing, it’s safe to say that it’s Joe and crew who are in half-life because it makes sense.

The product called Ubik comes into play because Runciter wants Joe Chip to find it and use it in order to protect himself against a malevolent force that is killing them in half-life. The book shifts into a quest of finding this mystical product that Joe keeps finding but in primitive forms. He needs to find Ubik in a spray can form because it is toxic in tonic form. Even when he does find it in a spray can, he cannot buy it because he has no money. Capitalism is working against him when he is desperately trying to find his salvation but he cannot purchase his salvation when he finds it. When he obtains money, the world has further regressed and the shop is no longer there so it’s a constant battle just trying to keep his world stable enough for him to just move forward with his life.

Of course, what I just said about Joe Chip being in half-life can be thrown out the window because it’s Philip K. Dick and he loves to mess with his readers. Everything about half-life is true and Joe Chip is not a good consumer in a world dominated by consumer products. Is he in half-life though? That depends on how the last chapter is interpreted. In the last chapter, it is Runciter who sees “funny” money. It is a “WTF” moment because everything the reader knows is displaced and the novel doesn’t have a solid, full circle end which can be annoying. The novel already has a deep meaning through its use capitalism and its implication for society. The ending just adds to it because it’s blurring the lines between what is real and what is not. It asks us, the readers, to decide that and that decision is based on our beliefs of our interpretation of what happened in the novel.

The novel ends up bringing faith into the novel. Joe needs to have faith in order to survive in a capitalism-driven world. Every chapter begins with ad about Ubik as a bra, a bank, pain pills, toothpaste and so on. The final ad ends with Ubik being God; “I am Ubik and I have always been there before humanity existed” or something like that. Consumer products have become their own of religion because they are so vital to our lives like God is. It sounds like blasphemy but how many of us could live without consuming and buying computers or an IPhone? I know my IPhone is vital to me, I panic whenever I misplaced. It’s a product that holds my identity and the sad thing is that’s true for many of us. We can deny it and say “It’s just a phone and you can always buy another one.” Only one part of the sentence is true, I can consume another IPhone but it’s just not an IPhone alone. It has a deeper meaning. It has my contact list which is vital because I don’t know anyone phone number from memory. Not even my Mom’s number. It has my pictures. It’s my connection to the world ( I wrote half of this review on my IPhone, irony). Our lives are define by consuming products and our worth is define by the products we consume instead of our humanity. It sounds cold but it is reality. Or at least, it is one version of humanity because reality is dependent on what we know and accept.

This is why I love Philip K. Dick. He makes his readers question everything about their world and that is what a great author does. They challenge our perspective and really make us wonder about how we are living our lives. Don’t get me wrong, I probably won’t make a change and depend less on technology but I’m definitely going to re-examine my relationship to products and technology.