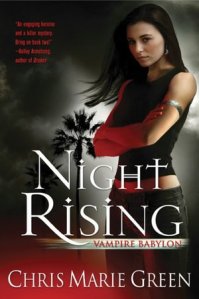 In this first book of an all-new trilogy, life proves stranger than the movies when a Hollywood underground coven of vampires comes to light-and gets targeted by the tough-as-nails daughter of a sexy screen siren.

Random: The book is a rough diamond.

The series has potential but it falls a little flat. It has a loose plot and less than appealing characters. Add in villains that may not be true villains, it is not what I had expected.

Let’s talk character. Dawn is the main protagonist who really likes sex. The first half of the book is about Dawn wanting to have sex with anyone and not being able to satisfy her craving. I have never read a character like her but Dawn’s constant need for sex made her a hard character to like. In the second half of the book, the action picks up so the novel is not emphasizing her sex drive (but it is still there). Kiko is a little person who has psychic visions. He is a struggling actor and has a lot of faith in his boss, The Voice. Breisi is a Hispanic woman who is a technology and combat expert. She is reserved but she is an interesting character. The Voice/Jonah is their boss and a hypnotizer. He never physically appears in the book. (I’m guessing vampire or ghost). He has many secrets and not very forthcoming with them. Frank (Dawn’s father) is an absentee character but he helps drive the story forward. It’s a nice touch of Green making him an absentee character to reflect his absentee father status.

The plot could have been tighter or at least solve the original mystery that brought Dawn to Los Angeles. It starts with Dawn looking for her father but she never finds him so that is highly disappointing. Instead, she half-solves the case he working on when he disappeared. The novel also adds Eva as a residual character. Eva is Dawn’s dead mother and Eva as a memory continues to haunt Dawn. The dead of her mother stole Dawn’s father away from her and Dawn is continually compare to and usually fails to live to the world’s expectation as the daughter of one of the most beautiful and talented actress. That’s probably the best part of the novel. So much of what is going on can be trace to Eva. There is certain starlet that reminds of me of Eva and I hope she has a recurring role in the second book.

The villains, if you can call them that, are vampires. I don’t really consider them villains because they are not turning or killing people against their will. It is the human who consents to what the vampires are requesting. There is a hierarchy and while it is a cold hierarchy, there is some warmth and caregiving with the vampires. The vampires don’t seem like villains. At least not yet. There is still hope for them.

I know it sounds like I didn’t really like the book but it was an okay book. It is not at the top of the urban fantasy series but it is not the worst urban fantasy book that I have read. It is just okay.

55th in the 150+ Reading Challenge
Also qualifies for: First in a Series, Where Are You Reading?-California

Blurb from Barnes & Nobles:
Alex Kosmitoras’s life has never been easy. The only other student who will talk to him is the school bully, his parents are dead-broke and insanely overprotective, and to complicate matters even more, he’s blind. Just when he thinks he’ll never have a shot at a normal life, a new girl from India moves into town. Simmi is smart, nice, and actually wants to be friends with Alex. Plus she smells like an Almond Joy bar. Yes, sophomore year might not be so bad after all.

Unfortunately, Alex is in store for another new arrival–an unexpected and often embarrassing ability to “see” the future. Try as he may, Alex is unable to ignore his visions, especially when they begin to suggest that Simmi is in danger. With the help of the mysterious psychic next door and new friends who come bearing gifts of their own, Alex must embark on a journey to change his future.

I truly love this book.  We have a blind protagonist, Alex Kosmitoras, who is really developed emotionally and has this unique way or second sight of seeing the world. He is blessed with psychic abilities that foretell the present and the future. Simmi, his love interest, is also blessed with being an empath.  Shapri also has a gift that she doesn’t accept but takes advantage of unknowingly. We have an interesting antagonist in Dax who is also a psychic. There was also an added touch of runes and tarot cards, thanks to Miss Teak owning a psychic shop and being Alex’s trainer. She has a fascinating background in that she grew up around a gifted family.

I like the whole psychic and gifts vibe going on. It’s an interesting world where there are very powerful psychics that act as magnets and draw other gifted individuals to them. Alex happens to be one of them. Very cool. Alex’s powers are that he has a second sight and it makes it difficult to distinguish between visions and reality at first. It’s how he firsts meets Dax and tries to wrap his head around Dax’s actions. I find Dax to be an intriguing character because he is always a part of Alex’s vision and a tormentor of Alex’s dreams so we only really get to see one perspective of Dax. And as this novel shows with different characters, certain perspectives can really far from the truth or right on the mark.

One of the things that I love was the fact that Shapri and Simmi were into advanced chemistry and they were proud of it. I love it when girls are not just a pretty face but actually have brains. Its even better when they are not ashamed of it. Go female empowerment. This just makes me extremely happy so I had to point it.

Since Alex is blind, there is a reliance on the other senses especially touch. There is a specific scene where he has to feel around Simmi’s room and finds an elephant figurine which is an interesting scene. I like that the descriptions come from what he is touching or smelling and that alone can create wonderful images. We might not see color through Alex but we have a clear sense of his world.

My one issue with this book is actually the relationship that Alex has with his father, Greg. Throughout the book, we feel Alex’s antagonistic feelings towards his father because Alex feels rejected by his father for being blind. There’s multiple scenes where his father is not portrayed in a positive light and yet when Alex discovers a secret of his father, everything becomes peachy. He accepts his father and it’s a “father-son fishing trip” type of life now. There’s no more resentment which I find a little unrealistic because there is no self-reflection on Alex’s part. After the secret is out, Alex doesn’t bring up those feelings anymore and those feelings cannot be just attributed to his father’s fear of psychic abilities. <-minor spoiler. I feel there has to be more to the antagonistic feelings Alex felt coming from his father prior to the psychic abilities coming into the open. Other than this part, the book is great.

I’m giving it 4.5 butterflies. There are strong characters in the novel and has interesting twists that drive the story forward. Alex and Simmi grow into their abilities and how they do so is shown throughout the book. While the visions may have dealt with one subject, they are useful and not just filler.

17th book in the 150+ Reading Challenge
Also qualifies for: Self Published, E-book, First in a series, Where are you reading?-Ohio

*Disclosure of Material Connection: I am a member of The Virtual Book Tour Cafe’ and a copy of this book was provided to me by the author. Although payment may have been received by The Virtual Book Tour Cafe’, no payment was received by me in exchange for this review nor was there an obligation to write a positive one. All opinions expressed here are entirely of my own and may not necessarily agree with those of the author, the book’s publisher and publicist or the readers of this review. This disclosure is in accordance with the Federal Trade Commission’s 16 CFR, Part 255, Guides Concerning the Use of Endorsements and Testimonials in Advertising.*