Review: The Girl Who Loved Tom Gordon by Stephen King 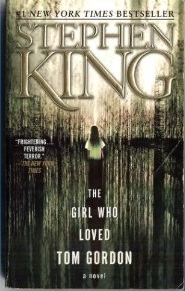 Blurb from Amazon:
On a six-mile hike on the Maine-New Hampshire branch of the Appalachian Trail, nine-year-old Trisha McFarland quickly tires of the constant bickering between her older brother, Pete, and her recently divorced mother. But when she wanders off by herself, and then tries to catch up by attempting a shortcut, she becomes lost in a wilderness maze full of peril and terror.

As night falls, Trisha has only her ingenuity as a defense against the elements, and only her courage and faith to withstand her mounting fears. For solace she tunes her Walkman to broadcast of Boston Red Sox baseball games and follows the gritty performances of her hero, relief pitcher Tom Gordon. And when her radio’s reception begins to fade, Trisha imagines that Tom Gordon is with her–protecting her from an all-to-real enemy who has left a trail of slaughtered animals and mangled trees in the dense, dark woods…

I adore Stephen King, I have a lot of fears to blame on him. Fear of clowns, fear of big dogs, and fear of creepy houses. He is a fantastic writer; The Stand and IT are amazing. This is why it is so hard to rate this book properly because I’m completely biased towards him but that being said, The Girl Who Loved Tom Gordon is not his greatest work. It is good, really good but not great.

King’s writing is flawless (I tend to perceive his writing right on the mark most of the time). The story is well-detailed, great imagery of the forests and Trisha’s emotion are captured on paper beautifully. So, why does this book leave me semi-disappointed? For starters, it wasn’t really scary. Trisha’s was definitely afraid of being in the forest alone (and who wouldn’t be) but her situation is more of a lone stranded survivor where the danger lies on what she is going to eat and her cleanest source of water.

The enemy that is hunting her is something I should have seen coming. When the stalker was revealed, it was a “Duh” moment. She is in the forest, what could possibly be hunting her? It is moments like these where I realize I probably have read too many serial killer books. It was a little disappointing because I was expecting a little supernatural involvement with the whole “subterranean” speeches. At the same time, it is a great twist because it misleads the reader. Urgh, so hard to decide whether I love this because it is a great twist or hate it because it makes me feel stupid for not seeing it sooner. That’s how brilliant Stephen King is.

The Girl Who Loved Tom Gordon is definitely a book about the journey of Trisha through the forests, that is the main focus. The stalking, the searching of Trisha, her parent’s reaction are really secondary features to the book. I found the journey to be tedious because I’m much more used to intense moments happening at a faster pace than they were happening in this book. It was a good journey, very descriptive but not for me. It is just one long journey of a little girl lost.

The final rating of this book is 4 black butterflies. It is a great journey told. It has its cringe-worthy moments (not many but they are there), and while it may not be the horror or thriller I’ve come to associate with King, it is a good suspense book.