Guest Post with Wendy Laharnar of The Unhewn Stone

Behind the Scenes of The Unhewn Stone
By Wendy Laharnar

Having decided to write a story set in the Middle Ages, I chose to base it on the Swiss legend of Wilhelm Tell (1307AD), because I knew nothing about it, other than some tyrant made Tell shoot an arrow through an apple on his son’s head. I wanted to learn more. 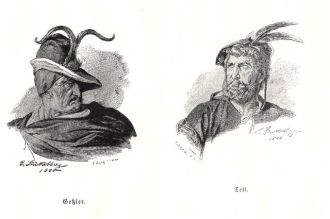 I studied everything I could find about the legend made famous by Friedrich Schiller’s play and thought perhaps History had short-changed the tyrant, Governor Gessler. After all, he was responsible for law and order; just doing his job. In fact, I got to wondering about Wilhelm Tell’s nature, too. He killed the ‘tyrant’, so was there really much difference between Freedom Fighters in the medieval world and the Terrorists of today?

The best way to examine this question, in The Unhewn Stone, was to place my hero, Stefan, on the wrong side of the heroic scene, making him a Gessler descendant, and then I sent him back to 1307. Stefan, a modern youth, bore the stigma of the hated name, even in his home town, because he came from Tell’s own village.

The story grabbed me by the throat and held me for the length of a 94,000-word novel – actually, for 117,000 words, which I chiseled back while editing and polishing.

By means of a magic orb and a wormhole, I transported Stefan back 700 years, so he could try to prevent the legend from happening and restore his family honour. Stefan was reluctant to go, at first. He was comfortable being a loner, hiding behind fancy costumes to cover his lameness and his scarred face. After I ‘introduced’ him to the time-travelling alchemist, who is Governor Gessler’s brother, Stefan takes up the challenge and becomes the Chosen One, the Messenger, on a mission to warn Hermann Gessler not to arrest Tell, because Tell would kill him at the Hohle Gasse, the Hollow Way.

What a joy for me to play in the medieval era, but what a dangerous place for my Stefan with only a Swiss Army knife and a PB100 (Swiss screwdriver) for protection against a shape-shifting sibyl, and an evil knight, who were both determined to kill him.

When my story stalled as early as chapter eight, I knew I needed more information…about the area.  I travelled from Australia to Switzerland, with my husband and granddaughter, Sara. We spent a lot of time in Bürglen and around Lake Luzern in Central Switzerland.

Sara, at fourteen, felt intimidated by the towering mountains and the threat of an avalanche. She wanted to get away from there. Also, in beautiful Bürglen, there was more evidence of guesthouses and hotels than farms. So, I re-evaluated Stefan, a farmer’s son who loved this narrow valley. He became claustrophobic, like Sara, and I changed him into an innkeeper’s son who wanted to be like the tourists escaping to greener pastures. He escaped all right, on the promise he’d lose his complex and gain his heart’s desire. He desired his unrequited love, Ursula.  But, oh dear…poor Stefan.

Since I was reinventing the legend, my main problem was in not offending the lovely

Swiss friends I made while in Bürglen. They treasured the Wilhelm Tell legend.
When they learned my hero was a Gessler, they were horrified and sought reassurance I’d give the story a happy ending. Well…this is Stefan’s story, so The Unhewn Stone has the inevitable ending, but I hope they won’t be disappointed if they get to read the novel, which would need to be in German translation for them.

Blurb from Amazon:
When teenager, Stefan Gessler, answers the call to restore his family’s honour, he discovers it takes more than superior education and pride to equip him for life in the Middle Ages. His dangerous adventures threaten his courage and challenge his beliefs.
Immersed in the turbulent events of the Wilhelm Tell legend, Stefan pretends to be a wizard when an avaricious sibyl mistakes him for an alchemist. The shape-shifting sibyl and an evil knight have diabolical reasons to want the wizard dead.

Faced with his own demons and those of medieval Switzerland, how will Stefan complete his mission and escape the fourteenth century…alive?
Life in the Middle Ages is a dangerous game, even for Üserwäälti, the Chosen One.

Wendy Laharnar can be found at her Website.
The Unhewn Stone can be purchased at Amazon, Smashwords, and MuseItUp Publishing.

Images were provided by Wendy Laharnar.

Posted in Interviews and Guest Posts