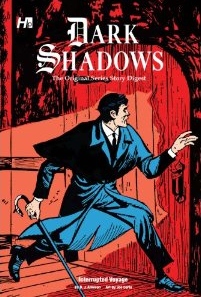 I had to get this book from Netgalley, it’s Dark Shadows. It was a gothic drama on daytime TV in the late 60’s -70’s and again in the late-90’s. If that doesn’t captivate someone, Johnny Depp is playing Barnabas in the new Dark Shadows film by Tim Burton. My favorite combination, Depp and Burton.

I absolutely love the artwork that accompanies the book. The art has an old feel to it which I love. It has very dark tones and shades. The best part is that it accompanies the storyline so the pictures capture moments in the story. Plus, all the characters are drawn there so there is no need for a physical description of them. It may have to do with the fact the story was written while Dark Shadows was on TV. I wished I knew what the art style was called so I could better explain it.

Story wise, I love it. It is a gothic tale through and through. We have Annabelle as the ghost, Barnabas as the vampire turned human, Angelique as the evil sister of Annabelle, and Calandra the witch. Oh, and Michael the zombie as well. The setting also contributes to the gothic feeling. It is a shore city where the inhabitants don’t trust strangers and are into burning at the stake. Plus, it is a tragic love story where the lovers (Annabelle and Michael)  are both dead and are trying to reunite with each other in the afterlife. A very lovely story.

The bonus features at the end is something that I really enjoyed. It mainly consists of the photographs of the original Dark Shadows with Jonathan Frid as Barnabas.  Some photos are of the cast posing for pictures and a few screenshots. Most are in black and white but some are in color.

Final thoughts on Dark Shadows, it is awesome. The artwork reminds me of the style use in comic books. It has an eclectic mix of supernatural creatures and somehow it makes sense for a witch to control a zombie. It is a gothic tale. Plus, Johnny Depp is going to be in the film adaptation and so is Helena Bonham Carter (Bellatrix from Harry Potter and Mrs. Lovett in Sweeney Todd) but more important, Tim Burton is directing it. I totally have to see this film. The only thing that would make this film even more exciting would be having Alan Rickman in it. Oh, I love him.  Hmm, getting off topic. Um, this is a five for me because I’m a huge fan of Dark Shadows and the movie has me pretty hype up. 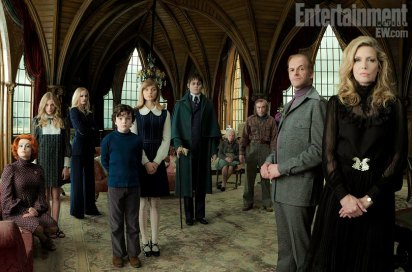