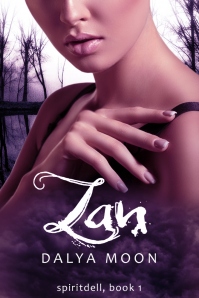 Magic. Power. Secrets. Everybody has something to hide.
Zan is a boy with a strange power: the ability to see all of your secrets, past, present, and future … if you’re a girl. Oh, and if you put your finger in his belly button.

With that specific, intimate touch, Zan is able to visit the Secret Town of any girl. There’s just one problem. He never likes what he finds.

When Zan meets Austin, a mysterious girl with long hair and a contagious enthusiasm for life, it doesn’t take long for her curiosity to get the better of her. Zan braces himself to see the worst, but then the unexpected happens.

In his vision, he doesn’t see anything.

This is a fantastic summer beach/pool book. It’s a light and fluffy even with the little talk about brain tumors.

Let’s talk about Zan. In order to activate his powers, he needs a girl finger stuck in his belly button which is hilarious and creative way to activate his powers. Zan acts like a typical teenage boy who is more interested in obtaining a girlfriend (Austin). Julie and James are his best friends. They are distinct from each other even though they are twins. Austin is the type of girl you want to feel bad for because she is in trouble. She is a decent and nice person.

The introduction of the paranormal elements in the book are well-spaced throughout the book. It starts with Secret Town and the fates of females. There are tea-induced mind-walking or astral projection moments that are interesting and quite revealing. As to how Zan obtained his powers, it is still a secret but we do learn more about his abilities and why there are so negative. The final paranormal scene was the most eye-opening because it reveals the most of information about Zan’s powers and his parents. Don’t expect any parental supervision in this novel because the adults are gone/oblivious or trying to kill Zan.

I’m not sure if I completely understand the importance of Zan’s powers. They are just so quirky that I can’t see how they can be use for the greater good.  There is a group who tries to steal Zan’s powers but I’m not sure why. Yes, Zan can tell the future but it is only for females and the fact that he needs to be poke in the belly button might hinder him. Not every girl is going to want to poke a man’s belly button. I’m looking forward to seeing Zan use his powers in a new way. I’m also looking forward to a more tightly connected paranormal world.

Overall, this is a good book. It’s about Zan and his obsession with Austin. It touches the paranormal world that Zan is a part of but is it not a heavy or mind-blowing introduction.

60th in the 150+ Reading Challenge
Also qualifies for: First in a Series, E-book, Self-Published,