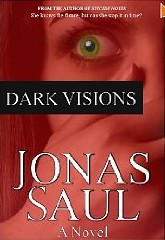 Amazon Blurb:
Sarah Roberts has a unique problem. She experiences routine blackouts, but what’s different about her temporary unconsciousness is, she wakes to notes written by her own hand. These notes are prophecies. Dark Visions. Future events with dire circumstances. Circumstances that she can avert, because Sarah is an Automatic Writer.

The novel begins with Sarah responding to one of her messages: Sit under the Elizabeth St. Bridge at 10:18am. Bring hammer.

Her next task is to avert a kidnapping. She’s done it before. Couldn’t be that hard. Things go wrong. The kidnappers recognize her. People are killed. Witnesses place Sarah at the scene. The police find her notebook riddled with prophecies of accidents and crimes. They want answers.

All this happens while the eighteen-year-old star in this first novel of the Sarah Roberts series suffers from trichotillomania, which means she’s a puller.

The story has numerous twists and turns and finally ends with a massive climax and a lead in to The Warning, which is Part Two of this series.

Dark Visions loves to jerk your chain around. It’s that type of book where if something can go wrong, it will. It’s emotionally exhausting because one moment Sarah Roberts, our protagonist, is going to be free of her kidnapper but it turns out that she just exchange one kidnapper for another. Its’ like “Nooooo.”

Sarah Roberts is an automatic writer meaning she receives messages from the dead and those messages (if she acts on them) can save the lives of people. Only problem is that in order to receive the messages, she has to black out. She also suffers from Trichotillomania; a compulsive hair pulling disorder. It was my first time hearing about it so I ended up looking online for it. It’s not physically that bad but I’m glad I don’t have it.

Like I said, this book is all about jumping through hoops. Sarah gets kidnapped because she foils a kidnapping plot. From there, all hell breaks loose. Her parents are working with the local cops to help find her. A psychic is enlisted to help find her and he is reluctant to do so. There is a tarot card reader and her estranged daughter who is selling art to a mobster. A kidnapping ring is discovered.

Sarah spends about 80% of the book in the stage of “kidnapped victim.” First, it’s by the kidnapping ring, then by an associate of Daphne (the tarot card reader’s daughter) when Sarah manages to escape the first time. A massive shoot out happens where she is taken back by the original kidnapper and the FBI gets involved. Why does the FBI get involved? The shoot out involved members of the mob. Sarah ends up escaping again but she goes back to the original kidnapper when he starts playing a chicken car race with an innocent bystander. She meets the psychic and they both get kidnapped by the ringleader of the kidnapping circle (I wasn’t expecting that particular person to be the ringleader). And more chaos ensues. That is the plot in a nutshell.

Even though the world is constantly placing Sarah in danger, she takes in strides and maintains a strong personality. She never once thought that she needed to be rescue. Instead, Sarah actively tried to rescue herself, either by escaping and fighting back when necessary. She was a strong protagonist that could never escape her bad circumstances.

I’m not particular fond of the epilogue because it leaves so many unanswered questions that from the blurb of the second book may not be answer. Like how did Sarah explained her notebook to the police? Why are her parents flip-flopping personalities? Why did the parents not tell her about her sister and how does she know it is her dead sister providing the messages? (<-This question should be answer in the next book, I hope). It’s been four years since she was first kidnapped and she is still is pretty bad at giving life saving messages to people.

I’m going to give it three black butterflies. It was entertaining but man, does it jerk your chain around. There are unresolved issues and events that are not properly explain. Sarah was interesting but the supporting cast wasn’t really there for me.

19th book in the 150+ Reading Challenge
Also qualifies: 1st in a series, E-book,  Why Buy The Cow? (I got this book free of charge from Amazon)