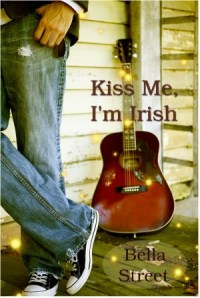 n 1813, Emily Musgrave is heading to a convent for misbehavior. But it was due to loneliness, not rebellion. In modern-day Tennessee, Liam Jackson is playing his Dobro in seedy bars and it’s doing nothing for his music career–and even less for the dark places in his soul.
Pixie mischief can not only change timelines, it can change hearts. Because every girl needs a little magic in her life

This was my first time-travel romance novel. It was really sweet. A departure from the dark fantasy readings I usually do.

It was a lighthearted novel with some characters that drove me up a wall. Liam, especially, but he is a brooding musician (they tend to that). The novel throws in fantasy elements like pixies and time traveling but they feel secondary to the romance of the novel. The fantasy elements do change the lives of the character so they definitely contribute to the storyline and they fit really well with the contemporary feel of the novel.

Liam is seriously bipolar; his mood changes very often. Maybe bipolar is a strong word but  he is incapable of showing the right emotion in the right situation. He gets jealous when men flirt with Emily but turns around and accepts a number from a woman who is dressed “skankier” than Emily. He gets angry when Emily dresses up for her manager’s position but secretly thinks she is attractive. He loves her but wants her gone because she can do so much better than him. I have a slight problem with Liam’s treatment of Emily. He doesn’t like the “going out” outfits that Tinker dresses Emily. They are too suggestive. He prefers her in what I consider conservative or innocent clothing meaning not showing cleavage. It looks like he is trying to keep Emily’s outer beauty a secret from the world. Emily needs his critique of her clothing because she likes him so his opinions matter but he does make her feel self-conscious about the clothes she is wearing. That is never good but the good thing is that Emily does have a backbone and wears the clothing she wants to. She is not completely complacent. Of course not, any girl that runs away has to be strong.

Besides the trying to control the clothes, the relationship between Liam and Emily is well-developed. It goes at a realistic pace and there is enough drama and emotional connective scenes that would draw them together. (Plus, Emily does have a weakness for Irish men). This novel is really good at creating relationships at a realistic level. Tinker and Emily connect really well. It is through Tinker that Emily begins to adapt to the 21st Century and begins to feel more self-assured about herself. Tinker and Emily are really great friends who both gain something from their friendship.

I’m giving this novel 4.5 black butterflies due to Liam trying to control’s Emily’s clothes. It was a great novel on building relationships.

36th in the 150+ Reading Challenge
Also qualifies for: First in a Series, Self-published,Science Fiction, E-book, Where are you reading?-Tennessee