Review: A Certain Slant of Light by Laura Whitcomb 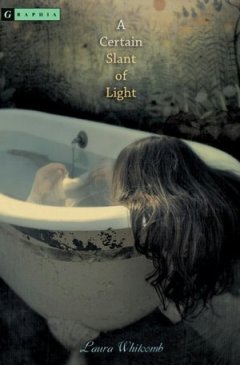 In the class of the high school English teacher she has been haunting, Helen feels them: for the first time in 130 years, human eyes are looking at her. They belong to a boy, a boy who has not seemed remarkable until now. And Helen—terrified, but intrigued—is drawn to him. The fact that he is in a body and she is not presents this unlikely couple with their first challenge. But as the lovers struggle to find a way to be together, they begin to discover the secrets of their former lives and of the young people they come to possess.

I knew I love the book the moment I saw the cover but story within the pages cements my love for it. It is so haunting and lovely at the same time.

Helen makes a very compelling character; she loves literature so she clings to those who like literature. She needs to be attached to a living person so she can continue to exist in the world of the Quick (the living). The ghosts called themselves Light (if they aware that they are dead). It’s when Helen meets James that she begins to consider her needs. James is a Light inside of Billy (a recovering drug addict). James introduces Helen to the idea of possessing a body that a soul no longer wants. The possession of the bodies helped both of them move on with their lives and be somewhat happy for awhile.

Helen posses Jenny and has to deal with a super conservative Christian family while James posses a drug addict. By helping the lives of the individuals they are possessing, they are bringing closure to their own stories by remembering their memories of their final moments. They died with the belief that they were sinning and probably deserve their death but as the memories come back, they start to remember what really happened.

Helen as Jenny helps the family move on from their extremely closed minded view of the world. Helen makes a better world for Jenny to live in and tolerate. James as Billy struggles to make a better life for Billy because Billy was such a troublemaker. In the end, he manages to bring closure to his brother.

Normally, I have issues with books but I can’t find anything that would decrease the rating of this book. Some may take issue with the portrayal of Jenny’s family. The family is hardcore Christian so deeply religious. I don’t have a problem with it because the type of philosophy the family claimed is very true. It’s also very true that certain lifestyles do smother people and Whitcomb showed both sides of the equation. Billy had extreme freedom while Jenny’s freedom was restricted and they both were just drowning in misery. Hating their very existence that Billy and Jenny were glad to have someone else take over their lives because they couldn’t deal with their lives. The book is sad on some level because the possessed individuals are so young.

I love the ending, it is very Titanic like. Anyways, I really liked this book. I will be on the lookout for another book by this author because I like the story she told.

71st in the 150+ Reading Challenge
Also qualifies for: Ghostly