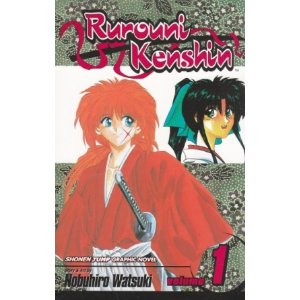 A hundred and fifty years ago in Kyoto, amid the flames of revolution, there arose a warrior, an assassin of such ferocious power he was given the title Hitokiri: Manslayer. With his bloodstained blade, Hitokiri Battosai helped close the turbulent Bakumatsu period and end the reign of the shoguns, slashing open the way toward the progressive Meiji Era.  Then he vanished, and with the flow of years became legend.

In the 11th year of Meiji, in the middle of Tokyo, the tale begins. Himura Kenshin, a humble rurouni, or wandering swordsman, comes to the aid of Kamiya Kaoru, a young woman struggling to defend her father’s school of swordsmanship against attacks by the infamous Hitokiri Battosai. But neither Kenshin nor Battosai are quite what they seem…

Rurouni Kenshin, what can I say about it except that I love it. I’ll admit that I watched the anime first (but that was such a long time ago that I don’t remember much of it).

Each chapter of the manga introduces a character so let’s meet them. Kenshin Himura, the protagonist, may come off as aloof and a little silly but he is not to be underestimated. He can be serious and he has interesting beliefs about what it means to have power and strength. Kaoru Kamiya is the first person Kenshin really befriends in the new town. They have a comedy-somewhat abusive relationship going on. It is funny because Kaoru has a temper that she is always unleashing on poor Kenshin. Yahiko  Myojin is the son of a former samurai and Yahiko now spends his time being a delinquent (reform delinquent). He has a good heart and likes to annoy Kaoru. Sanosuke Sangara is a man looking for a good fight and thinks Kenshin can deliver it.

The characters have a funny relationship because they are just ragging on each other (and mainly Kenshin). There are funny but rude (not really) comments to each other. Watsuki draws a lot of funny faces so the manga is quite a laugh at times. Kenshin does speak weird at times; he is always like “This one no longer fights” and he is referring to himself. He never really says “I” which always brings a smile to my face (cause it is not common to read that).

Plot wise, there isn’t a larger arc going on yet. It’s much more about the introduction of core characters. There are people interested in Kenshin because of his past as a Battosai. It doesn’t look like anyone is out for revenge but people are just bored so they want to fight Kenshin. Right now, it is Sanosuke who is interested in fighting Kenshin because he was hired to do so (and he would like a good fight). I’m interested in seeing how the battle progresses. Hopefully, a villain appears in the second book.

Art style, it was pretty good. Great use of solid lines. Nothing is really drawn lightly. Watching the anime, I knew Kenshin never really (but on occasion) drew blood from his opponents so I was a little confused by the fight scenes. Whenever a person is hit by the sword, it looks like blood is being spilled. Turns out, it represents the speed of the sword (I guess). It took a little to get used to but I’ll know for the the second volume.

I’m looking forward to picking the second volume in the series. The fight between Sanosuke and Kenshin should be good.