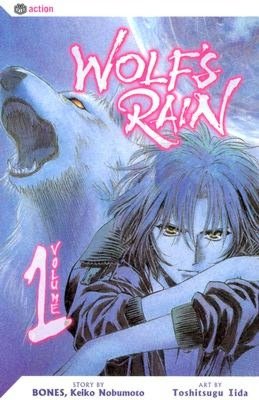 Four wolves on the run from mankind answer the highest, most dire calling-they seek the legendary Paradise. From the creators of Cowboy Bebop and Escaflowne comes this new manga take on the hit suspense anime Wolf’s Rain. Humans thought the wolves died off two centuries ago in this bleak post-apocalyptic wasteland. But some survivors lurk among the humans by mentally cloaking their animal bodies. One white wolf, Kiba, scours the land for the scent of the Lunar Flower that will lead them all to Paradise…

I love the anime of Wolf’s Rain so I had to pick this manga up. It’s a much faster pace than the anime though.

Character wise, the majority of the anime cast is present in the book. The wolf pack consists of Kiba (the emotionless but true believer of Paradise), Tsume (cynical of Paradise), Hige (always hungry) and Toboe (the kid). They are not best friends and just join forces because when you are being shot at, it’s the only rational thing to do. We have Detective Hubb Lebowski and his ex-wife, Dr. Cher Degre. Cher is the scientist who is analyzing Cheza the Lunar Flower and key to Paradise (so the wolves are tracking Cheza). There is also Quent the wolf hunter and his dog, Blue. They may play an important part later because he is determined to kill the wolves. The villain is Darcia who looks fantastic with his crazy porcelain mask and black hair flying everywhere. He is what a villain should should like. Strong and paralyzing. Everyone is pretty much interested in Cheza and her abilities.

What Paradise is..is Paradise like the Garden of Eden. The wolves are looking for it because they are near extinction. It’s not explicit as to why Kiba is looking for it but it could be a new home for the wolves because it looks like only wolves can track Cheza down. Cher has to analyze Cheza for the sake of science. What Darcia wants with Cheza is not explicit in the manga yet but like all good villains, I hope he will eventually reveal why he is after the Lunar Flower’s abilities.

Like I said, it is fast paced so perhaps not all the character are completely open to the readers. All the main characters are introduce right way but it is easy to keep track of them because they are drawn with unique features. The plot is pretty simple, everyone is looking for Cheza. They just want to find or have her. There are some minor sub-plots like Toboe meeting Tia and learning about the flower legend and the complicated relationship between Hubb and Cher.

Overall, it was pretty decent. It’s not a complicated plot, it’s just “Find Cheza.” All the characters are unique so there is not problem to identify them but they haven’t been given much of a personal background. They almost appear one dimensional but they are not. The art is amazing and so is the dialogue. The dialogue can be funny at times like Tsume saying that if they (the wolves) have to resort cannibalism that they shouldn’t eat Kiba because “he is full of crap.” I think it is hilarious; Tsume with his cynical and sarcastic is probably the best character of the series.