Review: Dragons Away! by K.D. Berry 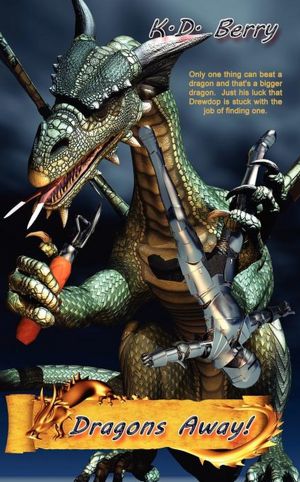 Blurb from Amazon:
It seemed like such a good idea at the time … a wager with the devious, dangerous and probably quite deranged King Davkosh of the Southern Realms. Half the kingdom staked in a race between mystery contenders. Ten leagues, point to point as the -er- crow flies.

Drewdop the Illusionist is quick to point out the flaws in this plan and is tasked with a secret spy mission – to find out just what kind of invincible champion Davkosh has training at home. Travelling in magical disguise causes unforeseen complications for Drewdop, while his half-ogre bodyguard, in the guise of a beautiful woman, certainly turns a few heads.

But Drewdop soon discovers that the great race is the least of their worries. Davkosh’s glamorous, fiery and ruthless queen, Gunora, is massing an army ready for attack whatever the outcome. Meanwhile, deep in the dark forest, one of Davkosh’s elite royal messengers is facing his own perilous destiny – how to become the world’s first and only surviving dragon rider…

It’s been awhile since I have a read a novel completely set in a secondary world. Those novels always remind me of Tolkien and this novel is reminiscent of that. The dwarves and the goblins hate each other. A dragon is the enemy. The only thing missing is the elves.

What I like about this novel is there is always something happening. It is filled with interesting mini-adventures and it slowly introduces other types of fantasy creatures. There is a battle with goblins, escaping from Gunora’s guard with the help of dwarves, Drewdrop’s illusions helping to defeat an invading army, and of course, the dragon race. Drewdrop is an illusionist who is kind of brave nerd character. He accidentally binds an imp to him as a familiar instead of choosing a cat. It is cute.

One of my favorite characters is Velasco who is a mischievous imp and familiar to Drewdrop.  He is just funny, sarcastic and a troublemaker. He always appears at random times which annoys Drewdrop. Fiery Flyer is also an adorable baby dragon. She grows from being a lone dragon who only had one good friend to expanding her circle of friends.

Most of what is going on in the story adds to the progression of the novel and character development. The planning of the war on both sides show just how mean and ambitious King Davkosh and Queen Gunora are but it also shows Gunora’s dependence on a magical well. I think it is supposed to show her allegiance to the dark side of magic but the well doesn’t really do much. On Drewdrops’s side, King Credos is sort of an idiot king but he is really nice. He is not concerned with coming up with a counterstrike which is going to save his kingdom but rather winning the dragon race which whether he wins or loses is not going to save his kingdom. He is not a great king but luckily, he has a great Captain, Drewdrop, and devoted followers who can think for him.

There was a little bit of awkwardness with the jokes from Queen Gunora and King Davkosh (who are the villains). “There is no such thing as a free lynch” was possibly the worst attempt at comedy from the duo. It is a cringe-worthy moment. Berry is funny when the comedy is physical or coming from Velasco. There are funny moments…just not from the villains.

Overall, it is a pretty good fantasy novel. There are great characters who are funny and quirky.

49th in the 150+ Reading Challenge
Also qualifies for: E-book