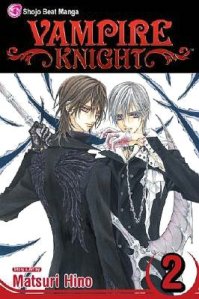 In the second volume of Vampire Knight, things start to unraveled and the world Hino is building shows more complexities than before. We learn of a vampire hierachy that consists of five levels. Purebloods like Kaname at the the top, aristorcrats are second, third are common vampires, fourth are humans that have been turned into vampires and the most dreaded of all levels, Level E for end (extinction). Level E are that vampires that were once humans but have lost their sanity so they go on killing sprees. I think the hierachy is interesting because the vampires of the Night Class have a disdain for the human-turned-vampires being which makes me wonder where do vampires come from? And what is a true Pureblood? Since the manga implies that Purebloods are in short supply.

Of course, there is always tension between vampires and vampire hunters, especially when one comes into the school. Yagari Toga is a vampire hunter and the former master/teacher of Zero before Zero’s family was murdered. Remember, Zero is now a vampire, a reluctant one, but still a vampire. What Zero is causes a lot of tension for Yuki because Zero is rejecting the blood tablets that are supposed to keep his blood lust at bay. She ends up committing the “forbidden act” of giving Zero her blood. Now, Yuki is trying to protect Zero from going insane and at the same time, keep it a secret from Kaname.

Yeah, there wasn’t anything groundbreaking in the manga. The Vice President Ichijo had a birthday party and Zero and Yuki where invited. Only after they were attacked by a Level E vampire in the city. That was interesting because once again, Yuki was incapable of defending herself against a rogue vampire. She does not appear to be a fighter at all.

My favorite scene is actually the short little bonus story after the novel has ended. In this scene, Kain calls Kaname a “gang leader” and Aido replies with call Kaname a “supreme gang leader.” Kaneme overhears this and decides to place a water-filled bucket on top of Aido’s head (and I find it hilarious). Supreme gang leader, that’s right.

20th in the 150+ Reading Challenge
Also qualifies for: Second in a Series, M/V/G Challenge